As I mentioned in my previous post, I am in the beginning stages of a pickle dish quilt.  I've selected quite a few fabrics, but I still need to settle on a background fabric.

Here are my fabrics so far: 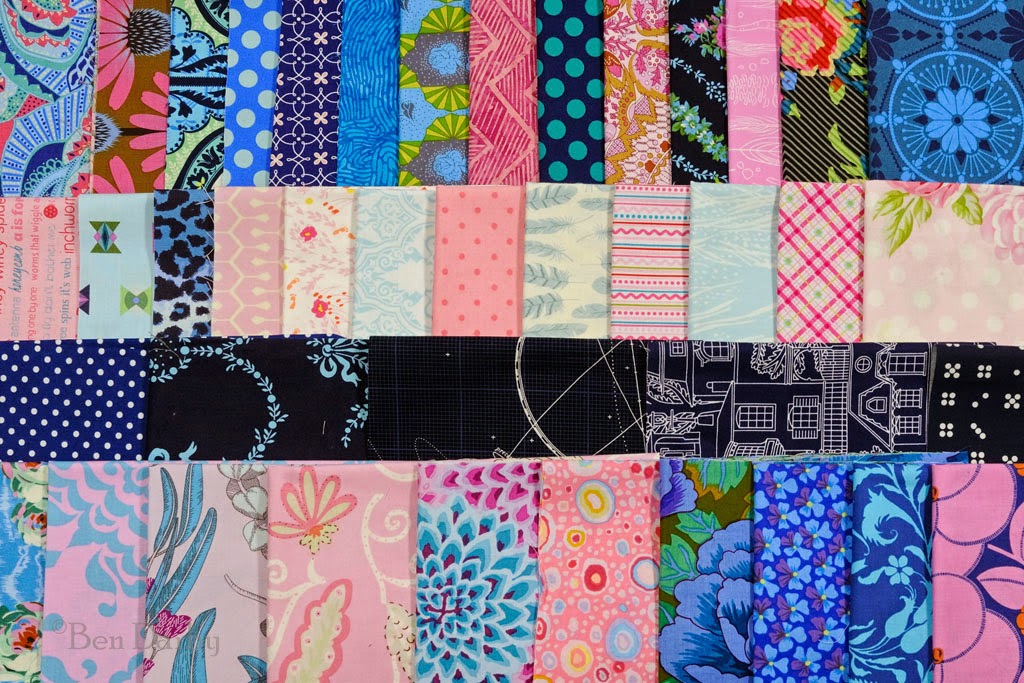 My plan is to use the first two rows for the arcs, the bottom row for the four-patches, and the navies for the footballs.  (I plan to add to this, and maybe remove a few as well.) 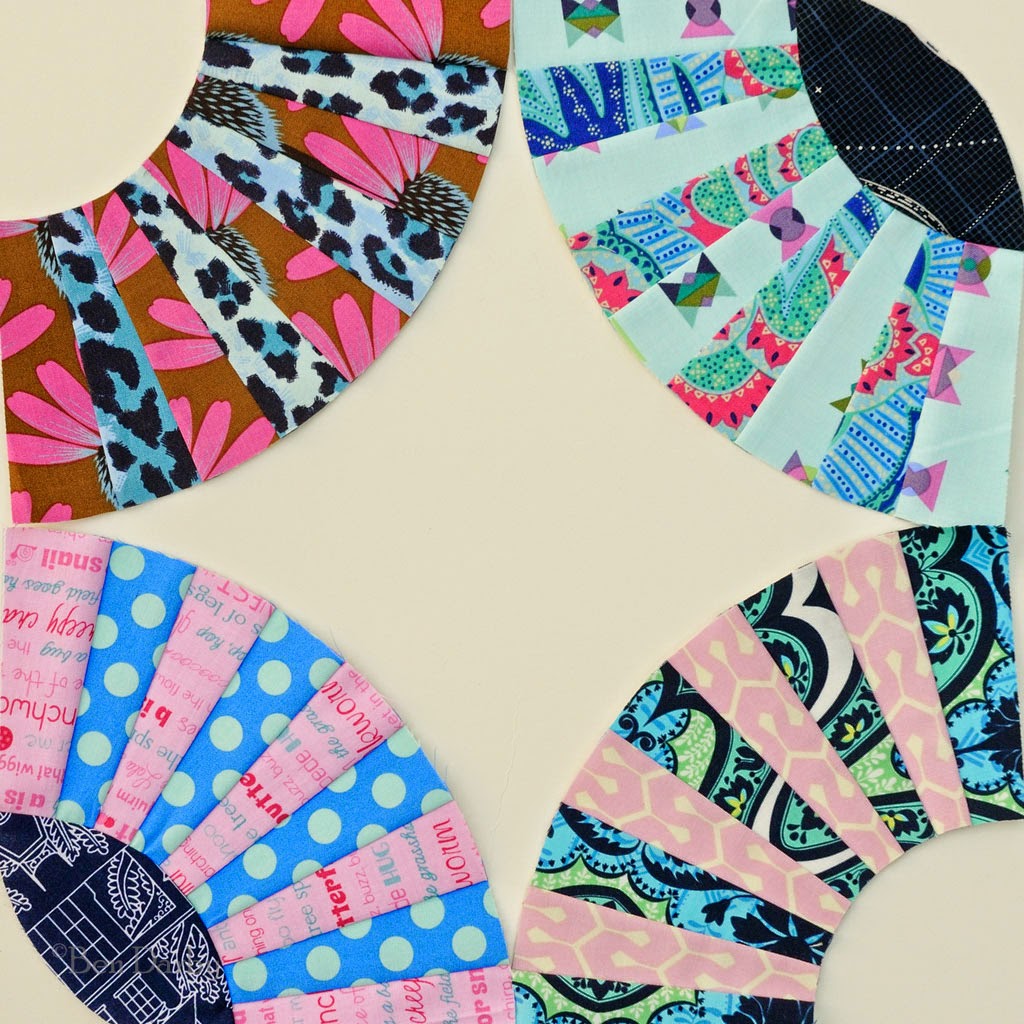 I tried quite a few possibilities.  To keep this post from being photo overload, I created a few collages of the various choices.  (The combined images look like a different quilt idea, but that is not my intent.)  Also, my method of importing the background images might not result in the correct scale for the prints.

Here is my first group of four choices: 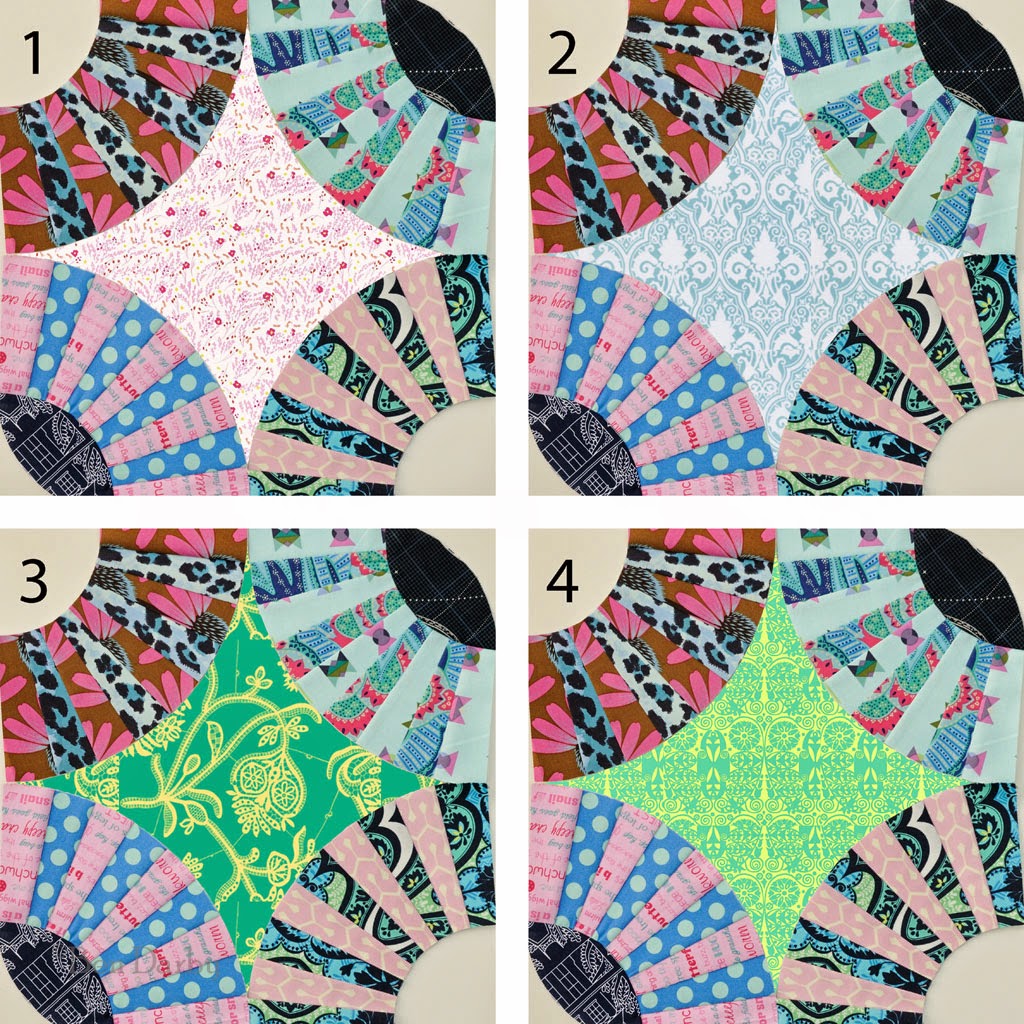 I think either of the first two would work, but neither seems particularly daring to me.  I had high hopes for these Amy Butler fabrics (3 and 4), until I imported them next to the arcs.  I don't think I care for either of these in this quilt. 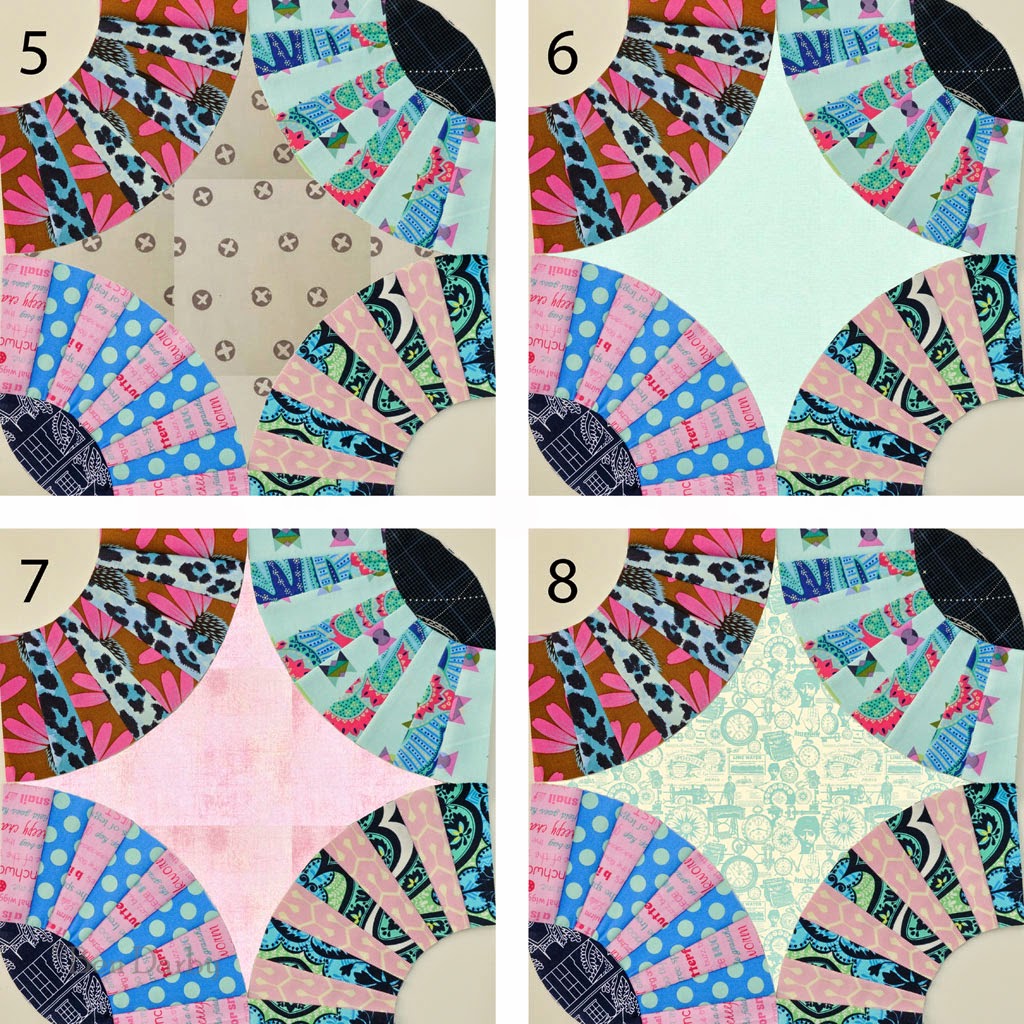 Number 5 is an upcoming Alison Glass print.  I like the variations in the color, and I sort of like the tan, but I'm not sure about the spots.  (I may use the navy version of this for some footballs.)  Number 6 is Quilters Linen; I like the color, but I don't know what to expect as far as texture.  I'm afraid it might be too plain.

I really like the look of number 7, except it doesn't have enough contrast with the pink arc sections.  I might consider a lighter Grunge if I could see it in person.  Number 8 would work too, and I like the fabric itself, but it's not really the look I want for this quilt.  (I've used a lot of texty and similar fabrics as backgrounds, and I'd like to branch out a bit.) 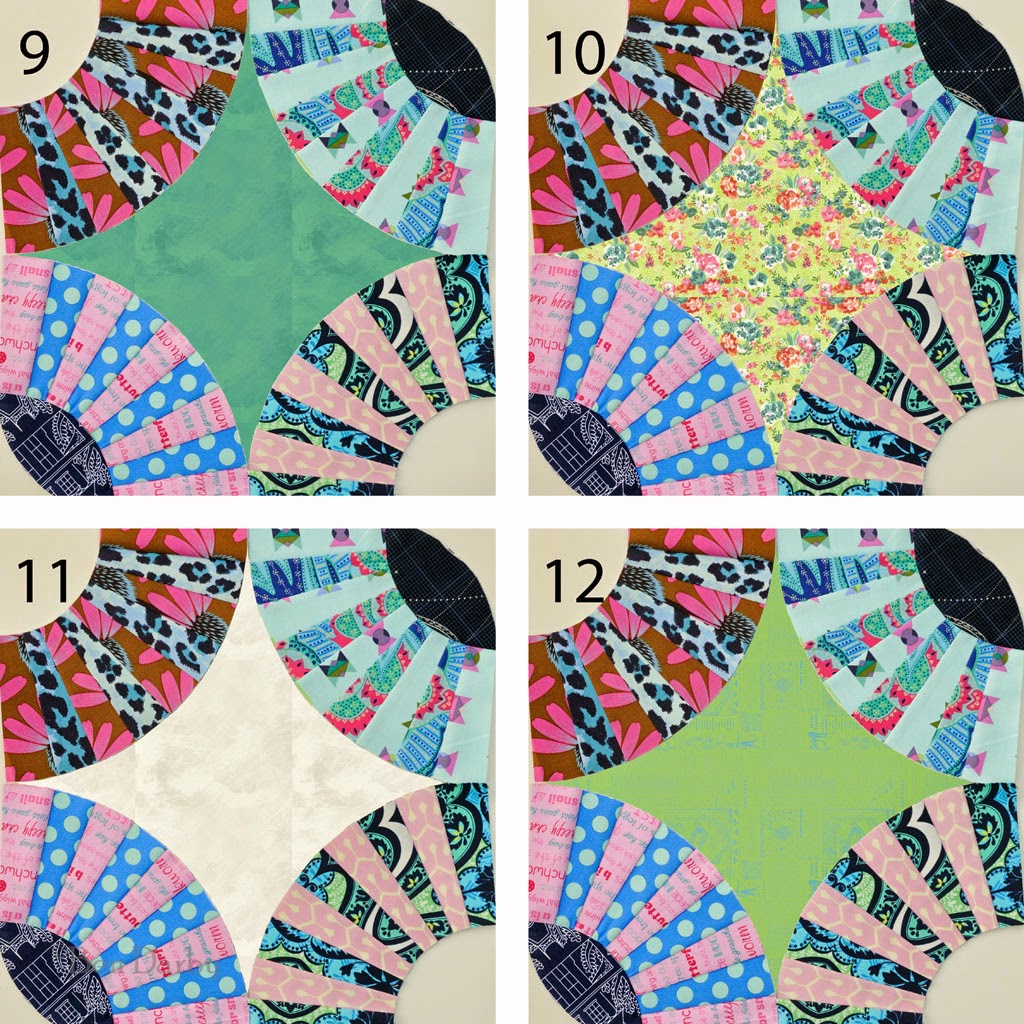 Number 9 is not at all what I had in mind for this quilt, but it's near the top of my list.  Number 10 seems even more off the wall; maybe too much so?  I sort of like it at this scale, but if the scale is much larger in reality I wouldn't want to use this.

Number 11 is a creamy version of number 9.  I love the tonal variations of this one, but I'm afraid it might still be too plain.  Number 12 is a text print (I know, I said I'm trying to stay away from those).  I think this one might just be too green, although it is hard to tell with computer images.

I tried quite a few other images, but those above were my favorites.  I also noticed Kate Spain has announced a new line (Paradiso) with colors that might fit well with this quilt, but I have not seen any digital swatches.

I'd love to hear your thoughts about any of the choices above.

I'm linking up with Lee for WIP Wednesday.
Posted by Ben at 7:31 PM 11 comments:

I thought I'd share how I made some templates for an upcoming quilt project...

I'm starting a pickle dish quilt based on the design in Kaffe Fassett's Quilt Romance. My first step was to carefully cut the pattern pages from the book so I could lay them flat on a scanner bed. 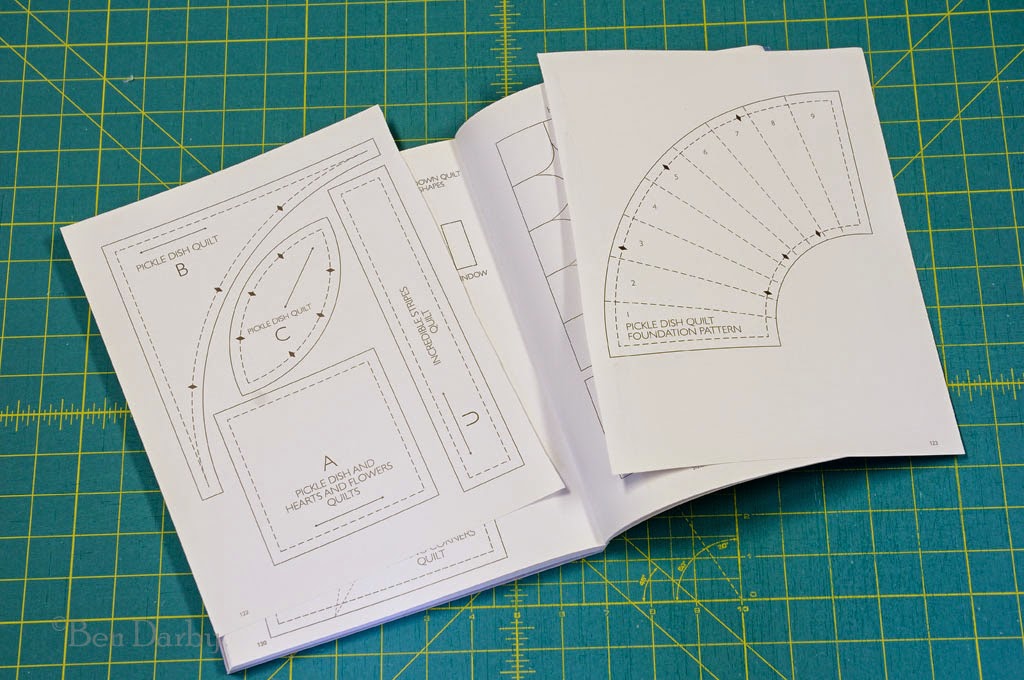 I scanned the pages and printed the shapes I wanted to use for templates (pieces B and C), being careful to keep the sizes unchanged.  I cut the shapes out roughly, leaving a margin around the edge, then I used basting spray to temporarily affix them to the underside of a piece of template plastic.

I traced the markings I wanted to keep onto the template plastic using a fine-tipped permanent marker.  I didn't really need the seam lines except for the straight edges of the background piece -- I plan to cut those on a fold.  For the alignment marks, I used a drill press to make holes in the plastic at the given locations.  I found that a 5/64" hole works well to allow a Frixion marker to draw an alignment dot on the fabric. 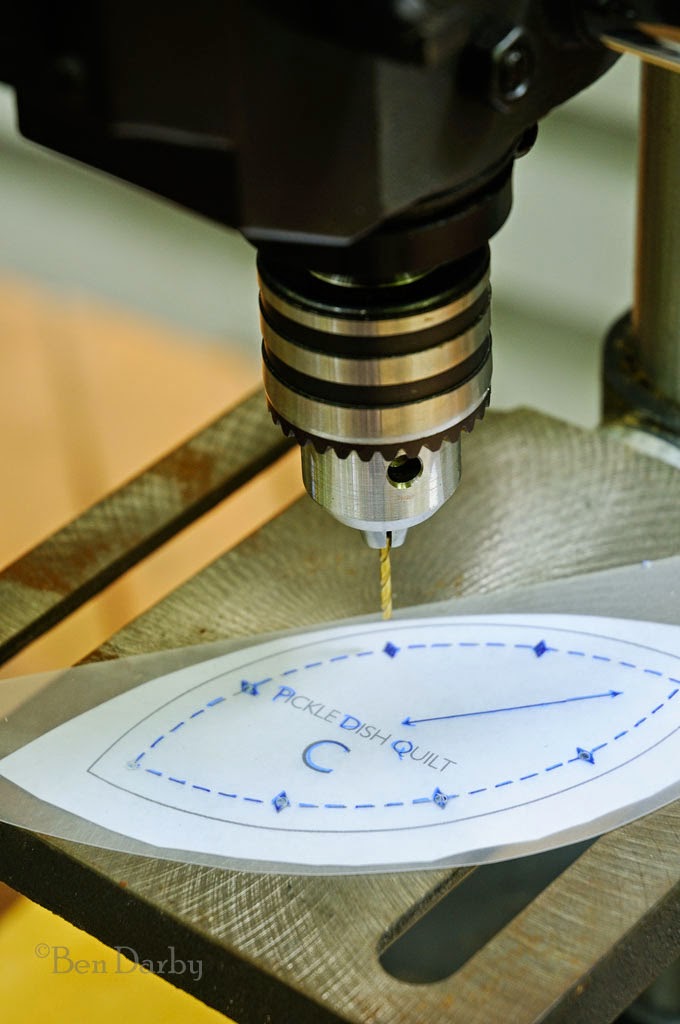 I used a utility knife and an old cutting board to trim the template shapes along the cutting lines.  This template plastic is too thin to use as a cutting guide with a rotary cutter, so I traced around the shapes on the back side of my fabric then cut them out "freehand."  I stacked several fabrics to cut at once, which was a little frustrating with a rotary cutter and no ruler.  I found it easier to pin the fabrics together (after a rough straight cut to separate each piece) and cut with scissors. 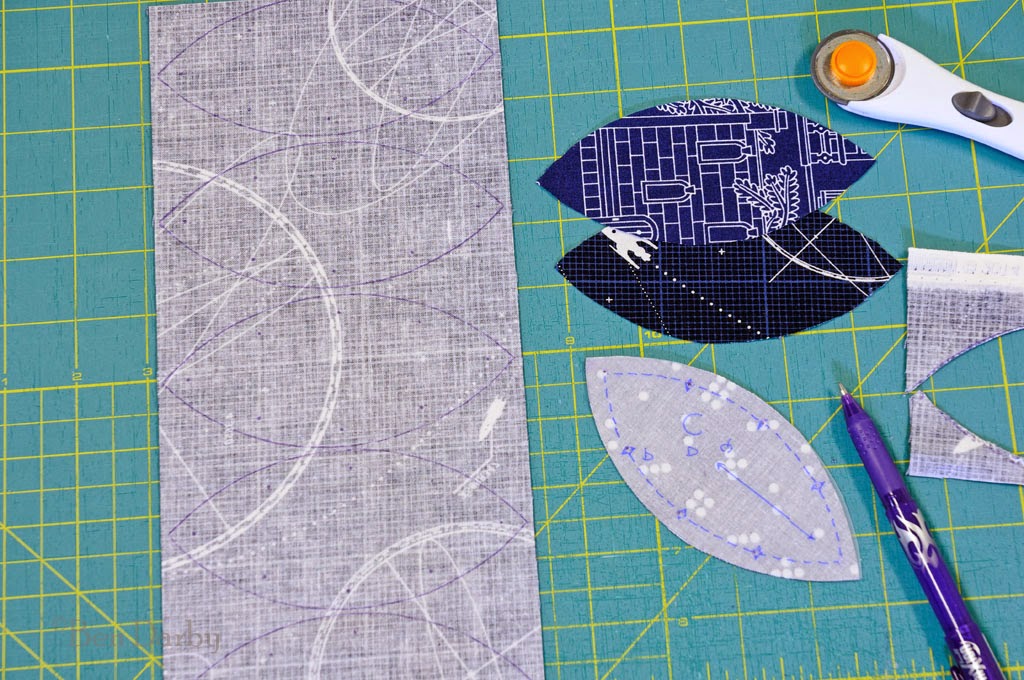 For the underlying fabrics, I aligned the template on the cut pieces to transfer the alignment marks.

I also scanned the fan shape to print on foundation paper.  I was able to just fit two shapes on legal size paper: 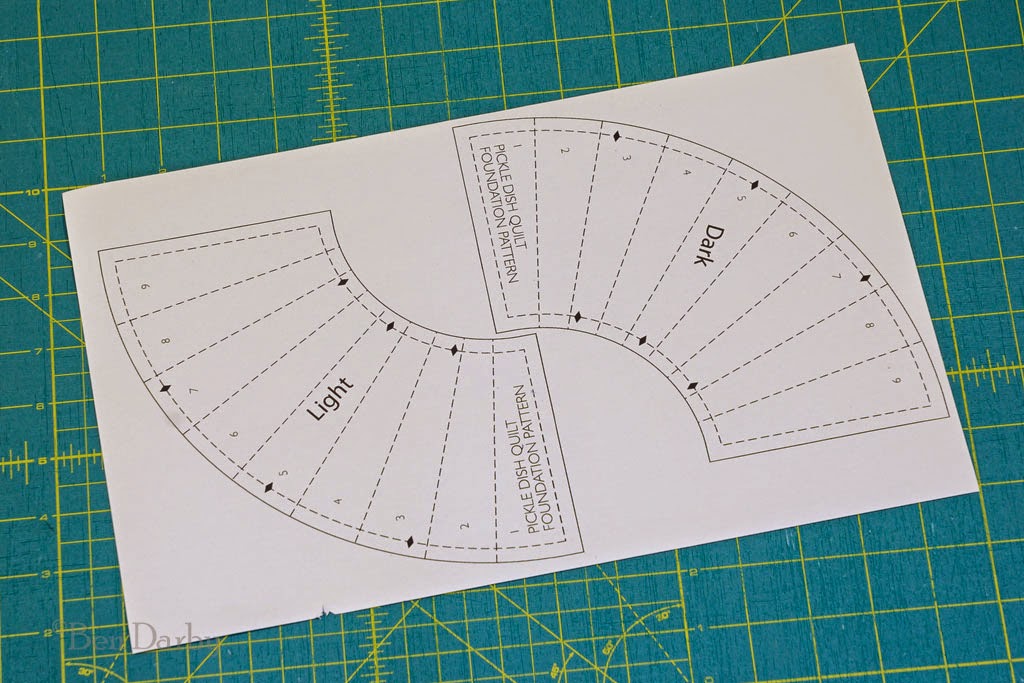 I expect this to be a long-term project.  I'm still collecting fabrics for this, and have yet to decide on background fabric.  That might be a subject for a future post.

I'm linking up with Lee at Freshly Pieced for WIP Wednesday.