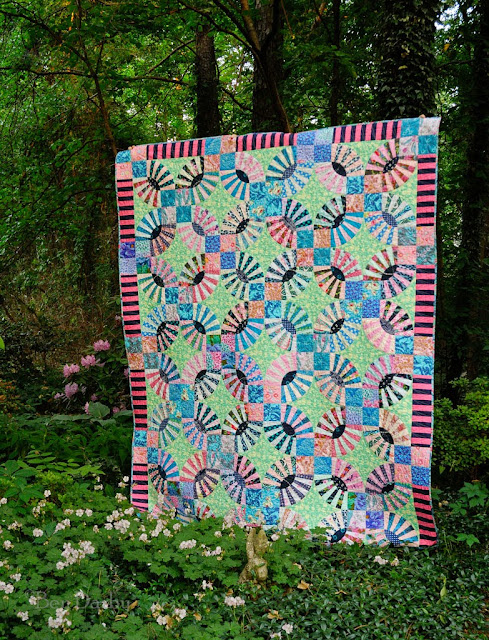 I first posted about this project about eight months ago -- and it is finally complete!

I used the Pickle Dish pattern from Kaffe Fassett's Quilt Romance.  The pattern is featured on the cover of the book, and my original color inspiration came from the photo on the back of the book: 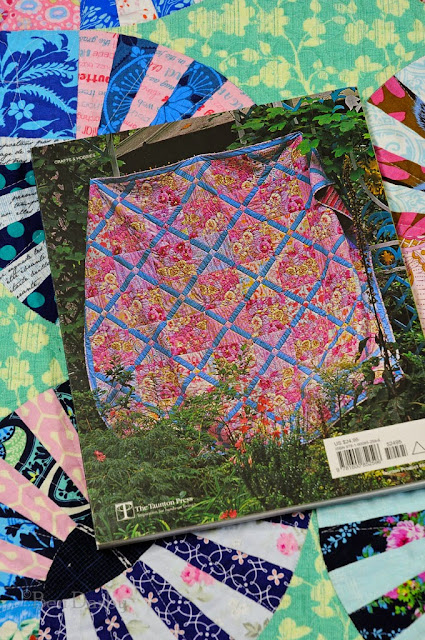 Obviously I strayed a bit from that original thought, but I did keep mostly to turquoise blue and bright pink, adding navy centers and a spring green background. 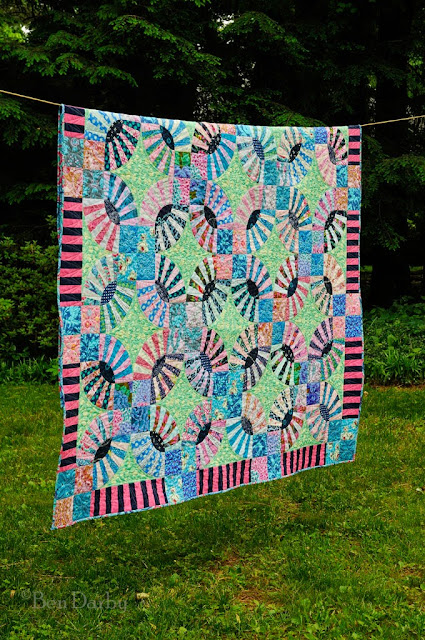 The pattern recommends strong contrast for the fabrics in the arcs.  I learned as I went along that some fabrics did not provide the contrast I had hoped; some of the "in-between" fabrics worked better for darks than lights, and vice versa, so I adapted my plans a few times.  I wanted less contrast in the four-patch units, to draw less attention, so I kept them in the medium to dark range.  I preferred "busier" prints in these squares too. 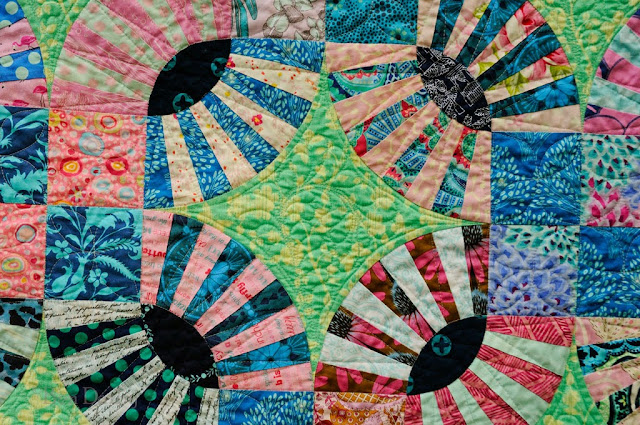 This pink arc with the flamingos is one of the lightest arcs on the quilt, but I couldn't resist using it: 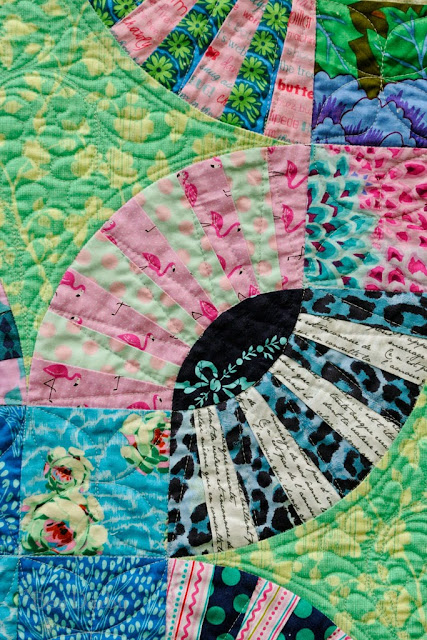 I collected enough different fabrics for this quilt that I didn't really need more than a quarter yard of any of them (other than the background and border, etc.).  I bought most of the fabric in half-yard increments, though, so for the quilt back I cut 17" squares from 30 of the prints and pieced them together with half-inch seams. 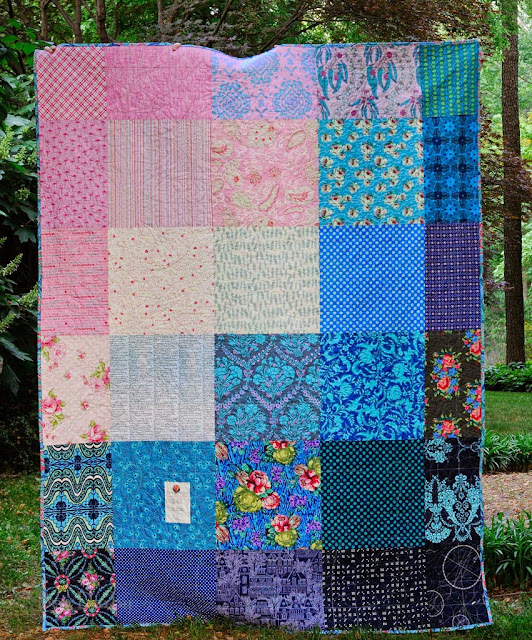 One mistake I made was cutting too many small rectangles for the arcs, including cutting up entire half-yard cuts of some of my favorites.  I had quite a few of the rectangles left over (I used some for the border of this mini, and for this pincushion). 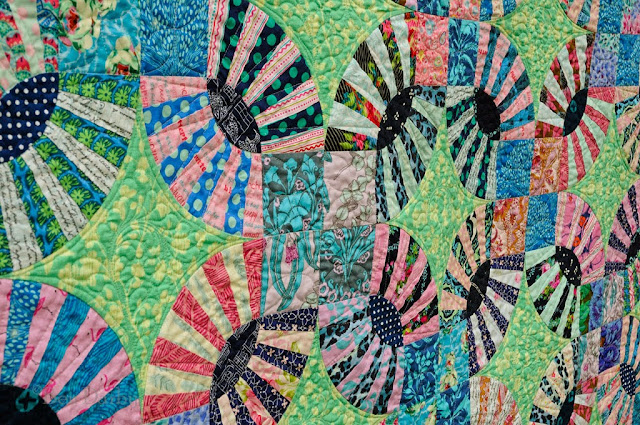 For quilting the arcs, I chose a simple straight-line design.  I had trouble quilting these free-hand, so I purchased a long-arm ruler to try.  It worked out pretty well, even though my hopping foot is not circular: 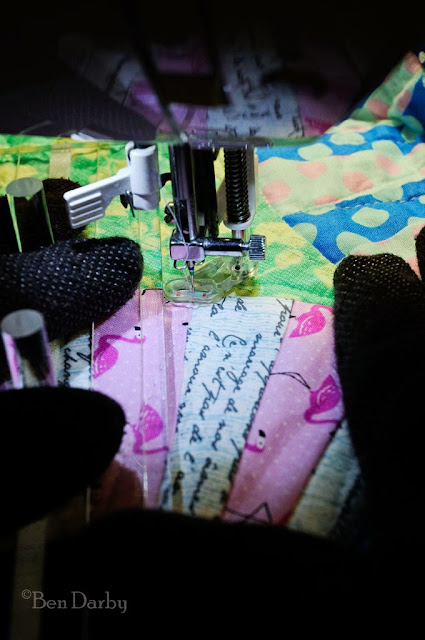 The shape of the foot restricted the angles I could use, and caused some variability in the distance from the ruler to the needle.  I wasn't always able to line up the destination point just right; I eventually decided it was OK if the quilting didn't line up exactly with the piecing.  This picture shows how I estimated the end point: 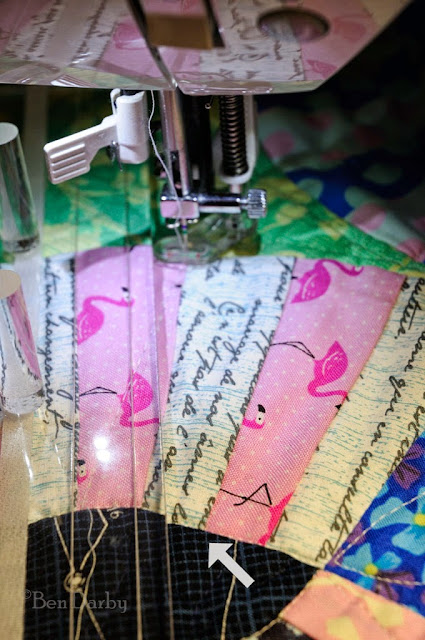 I also had to be careful not to apply too much lateral pressure against the hopping foot.  The foot is flexible enough that a couple of times I pushed the flange over underneath the needle.  I broke three needles on this quilt!

The ruler I used has a thin strip of Velcro on the bottom, which keeps it from slipping; it also helps to guide the quilt sandwich under the machine.  The ruler also has a couple of posts to use as handles.  Note how they barely clear the threading lever!

I tried to keep the quilting on this one simpler and less dense than I often do, to allow the piecing to shine.  I got a little carried away with feathers in the background pieces, though. 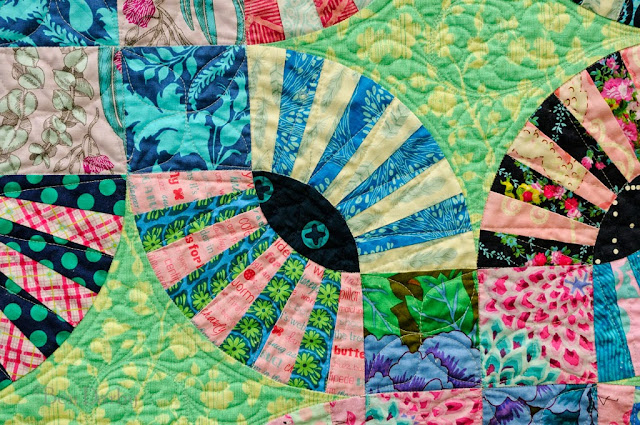 I followed the example of the pattern and used a stripe in the border.  I used the ruler again to quilt diagonal lines.  The binding is an Amy Butler fabric which has most of the colors used in the quilt. 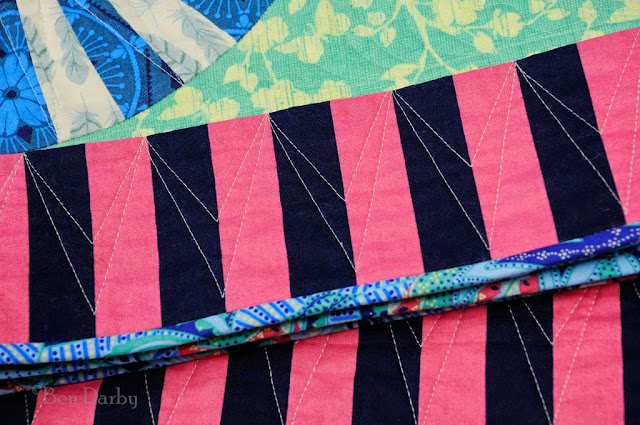 I had more trouble with puckers on the back of this quilt than I've experienced before.  I don't know if I didn't baste very well (I use basting spray plus scattered pins), or if I tugged on it too much as I was doing ditch quilting around the arcs, or if it was the way I used the ruler.  Once I realized it was happening, I added safety pins to the center footballs, then free-motion stitched around them before quilting the diagonal lines.  I don't know how much that helped, but I did not have any more puckers after that.  I repaired the worst of the puckers by redoing the quilting in those spots, with additional basting from needle and thread. 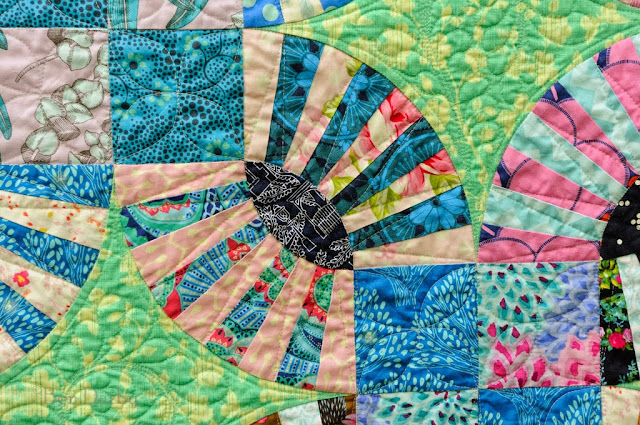 My projects tend to alternate between bright fabrics and more muted tones.  I'm pretty sure my next quilt will not be as bright as this! 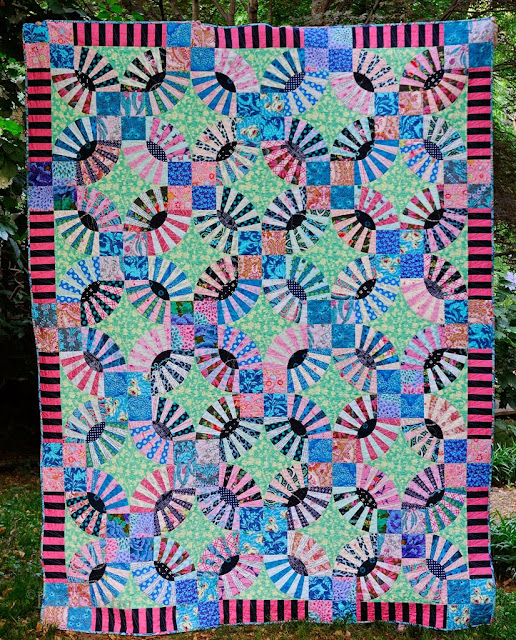 I'm glad to have this done in time for the Blogger's Quilt Festival over at Amy's Creative Side.  I'm also linking up with crazy mom quilts for Finish It Up Friday.