About a year ago, I won a fat quarter bundle of Angela Walters' Legacy fabric (thanks Amy!).  I mixed in some other fabrics with the bundle and made a quilt using Atkinson Designs' "Hexie Garden" pattern.﻿ 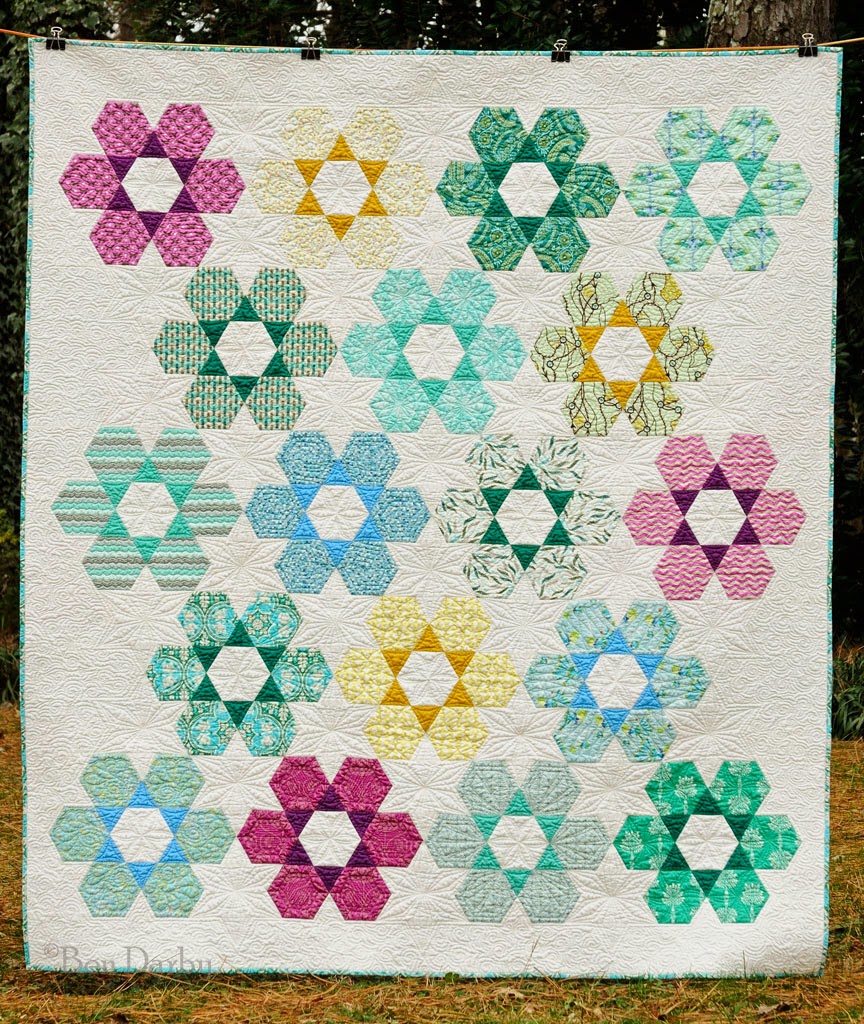 I used Julie Herman's Hex N More ruler to cut the hexagons and the triangles.  The pattern did not call for this ruler specifically, but it worked perfectly.

Each "flower" used less than a fat quarter, and for some of the fabrics I purchased half-yard cuts.  I used some of the extra fabric in the back, along with a couple of yards of a Heather Bailey fabric I found on sale.  I thought the colors in the Heather Bailey fabric were perfect for this quilt, but I was afraid the scale of the design would not work well in the hexagons -- hence the use on the back. 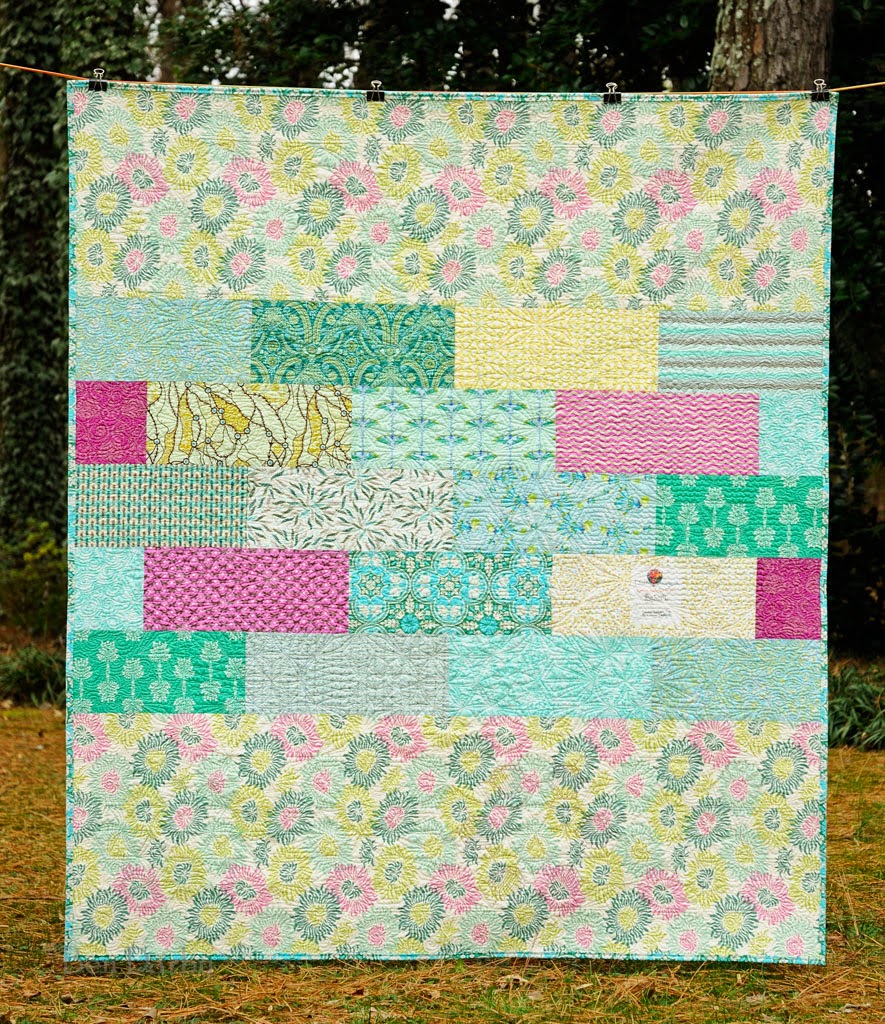 I chose the additional fabrics for this quilt at about the time the "radiant orchid" challenge was taking place.  I knew I'd not finish this in time for the challenge, but it did inspire me to add in some orchid fabrics.

For the quilting, I did a point-to-point design in the secondary stars, and added some "ghost" stars in the border.  My goal for the remainder of the border was to quilt a dense design that would contrast with the stars.  I don't think I achieved the goal completely; I believe I could improve on my density. 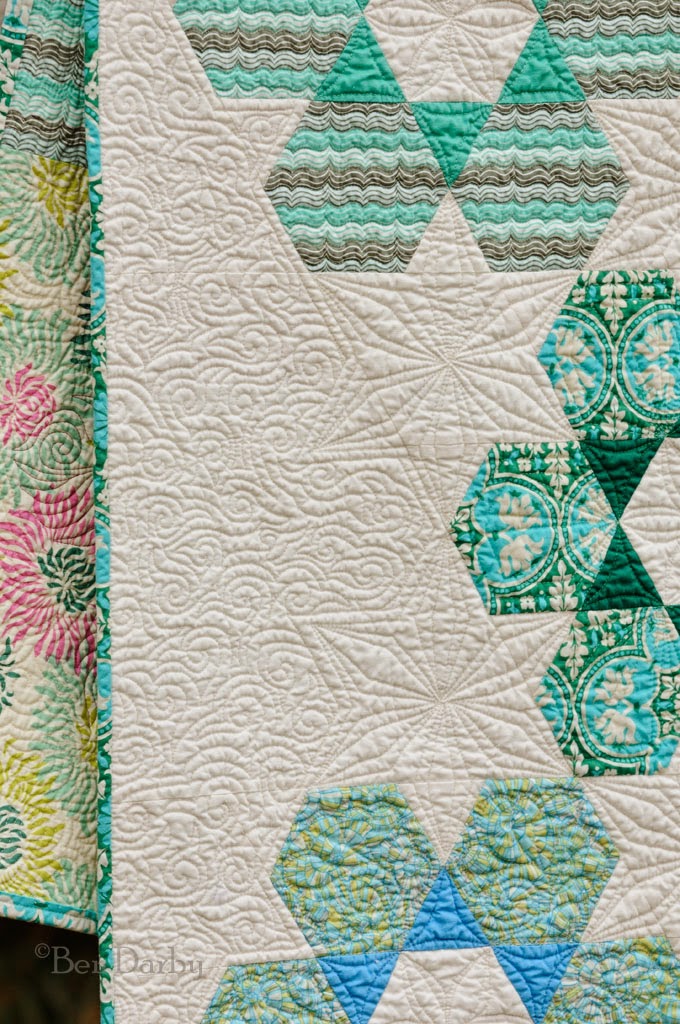 I quilted the center of each "flower" with the same design, but I used various designs in the prints.  Here are a few photos: 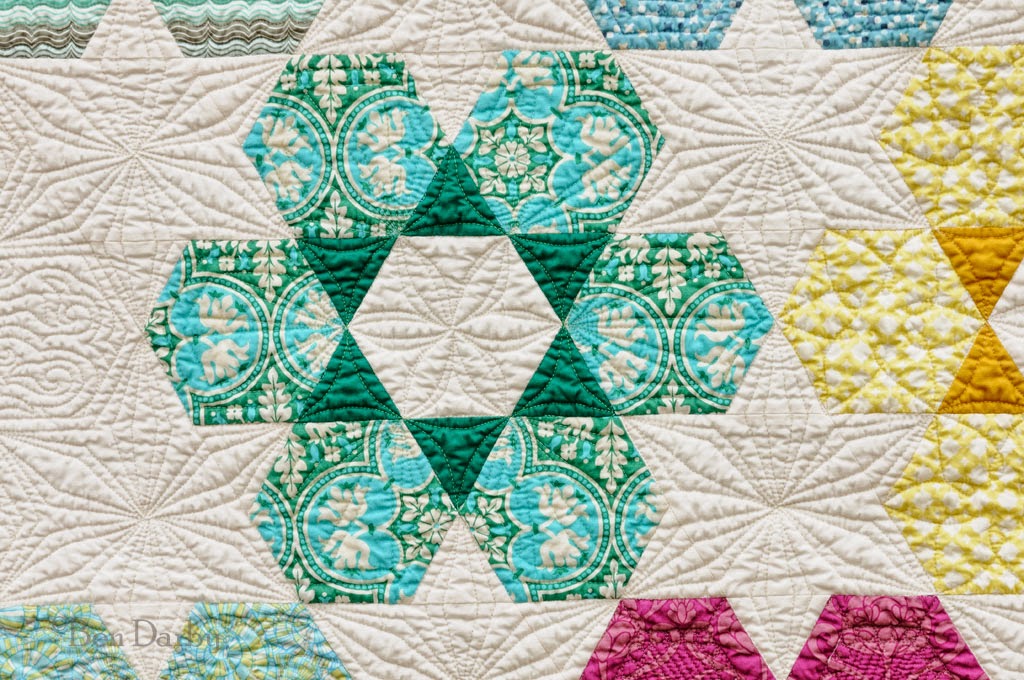 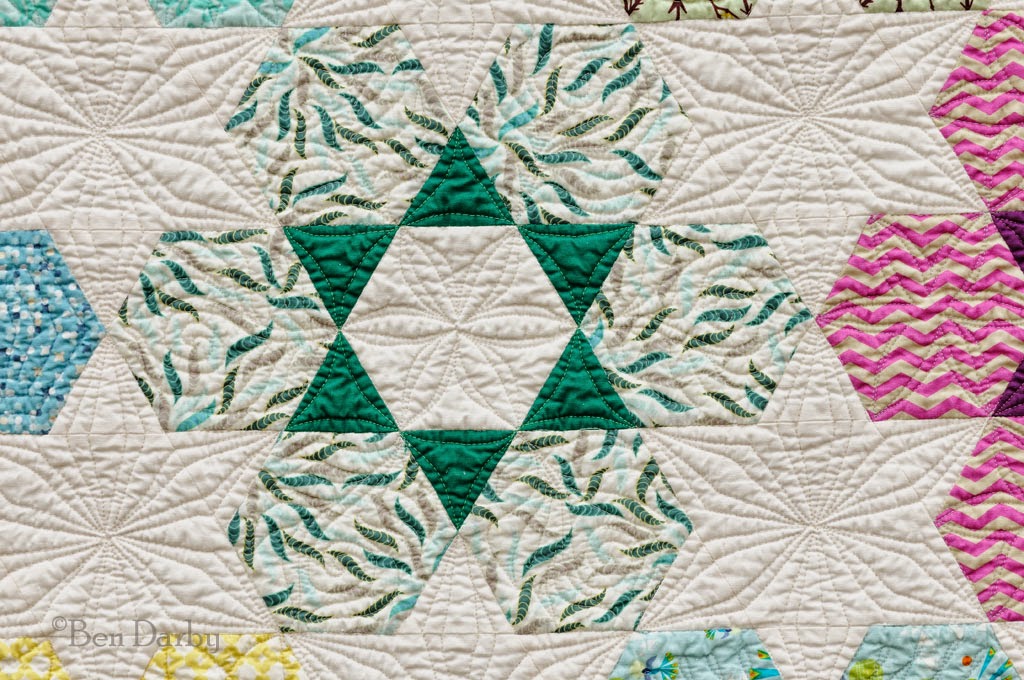 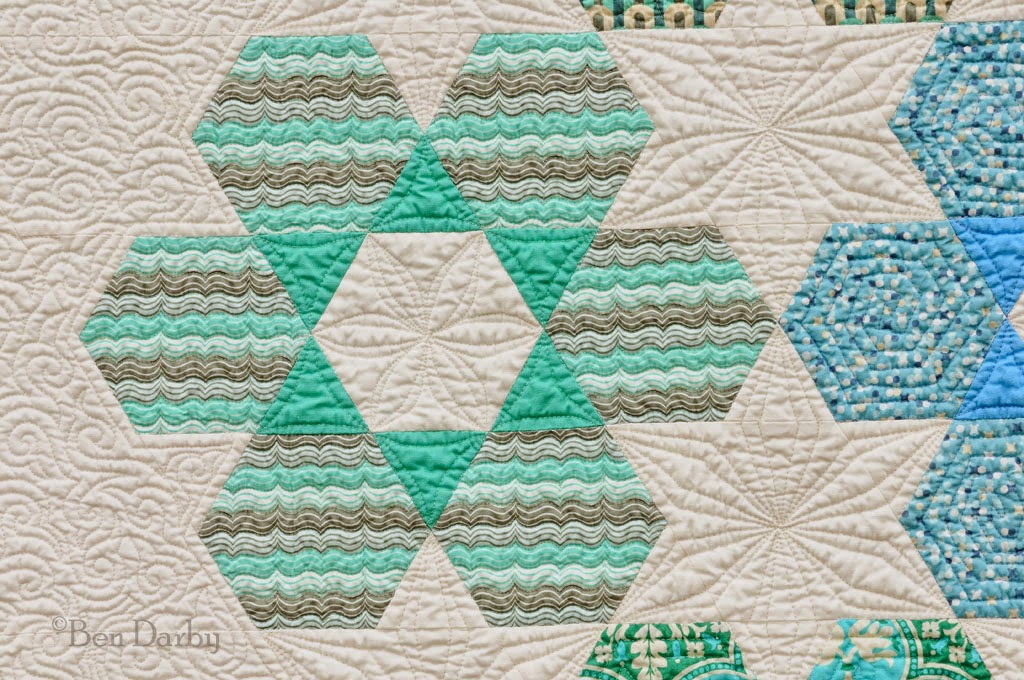 For the binding, I used a Joel Dewberry print also used in the hexagons.  I had originally chosen a different fabric, but when I saw this print in person I really liked the design and the way the colors played with the other prints. 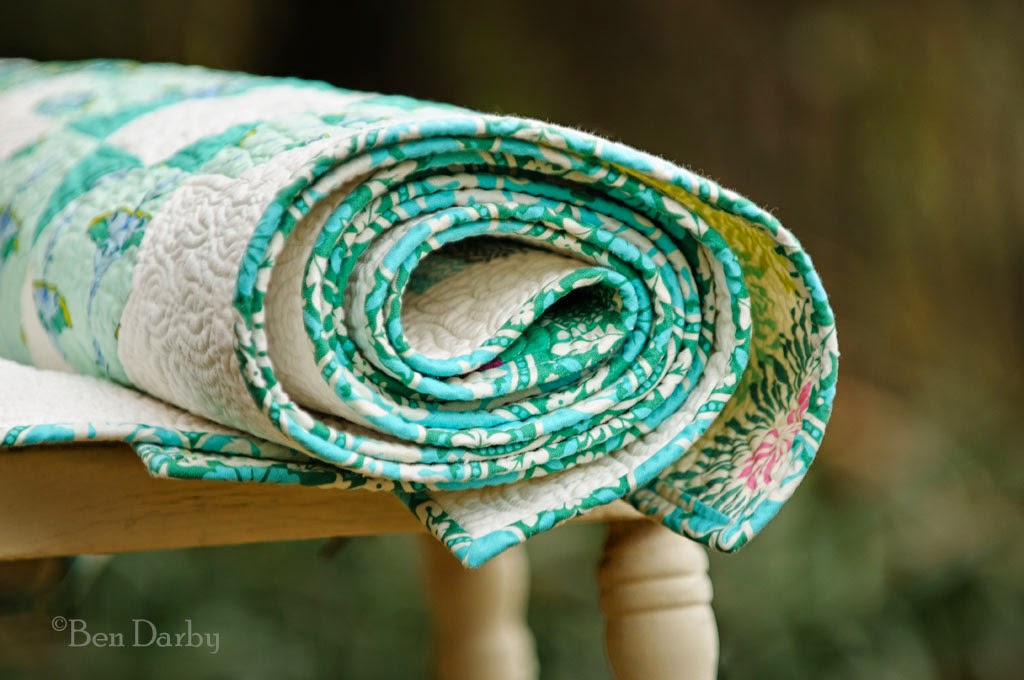 ﻿
At the risk of photo overload, here are some more shots... 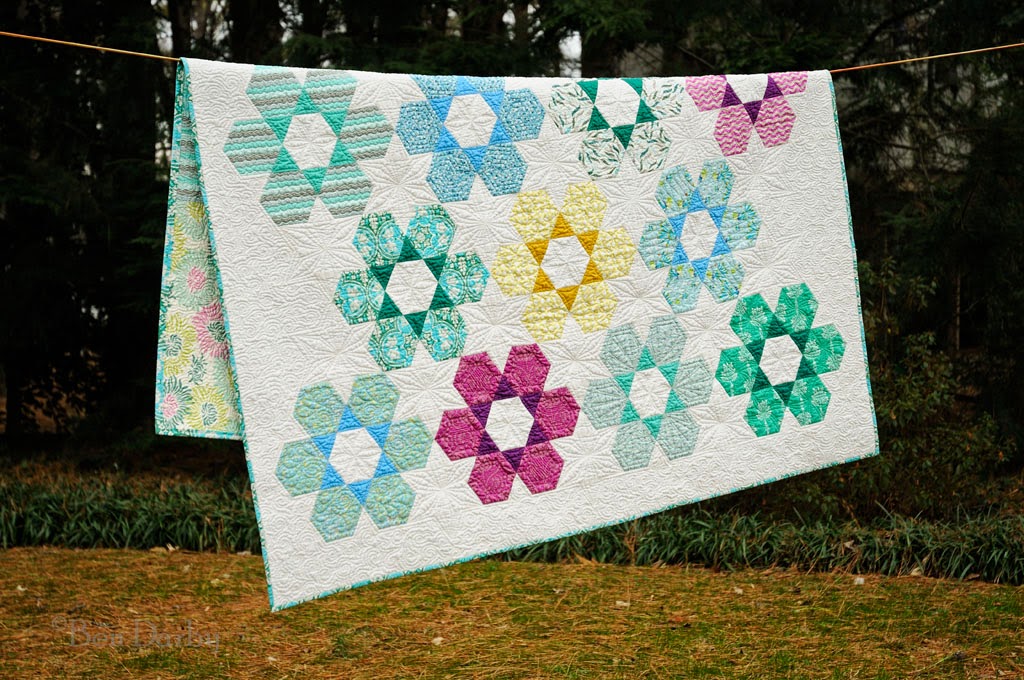 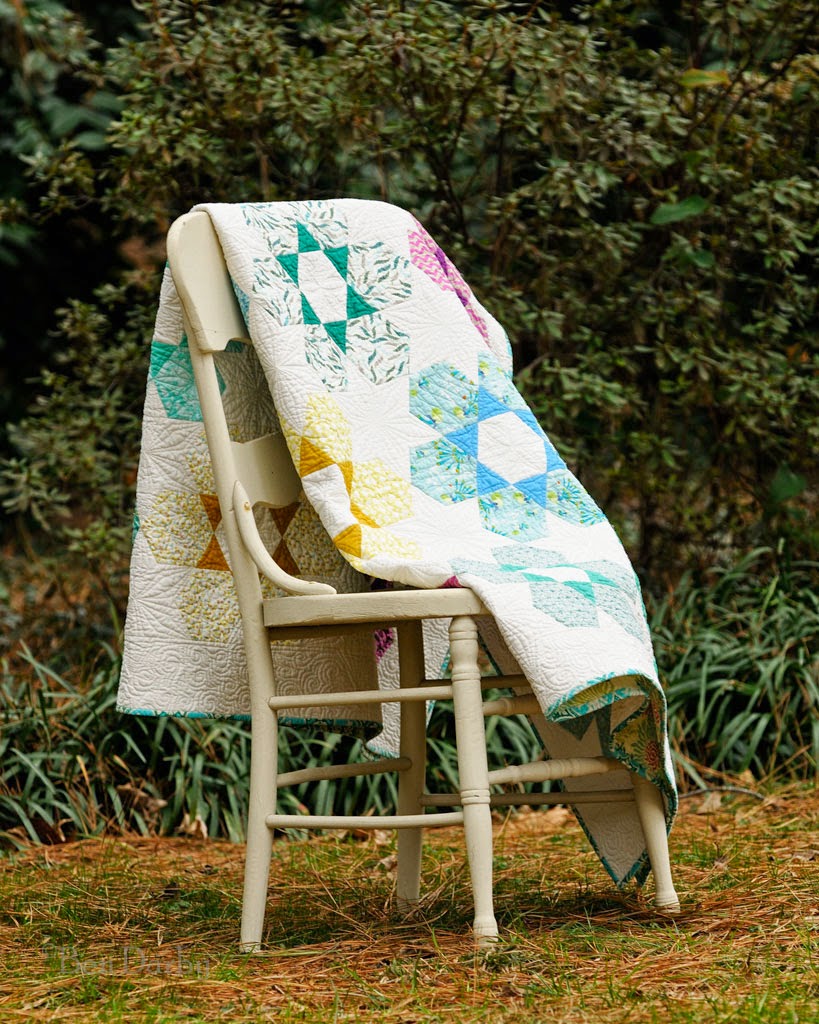 ...including more of the quilting in the blocks... 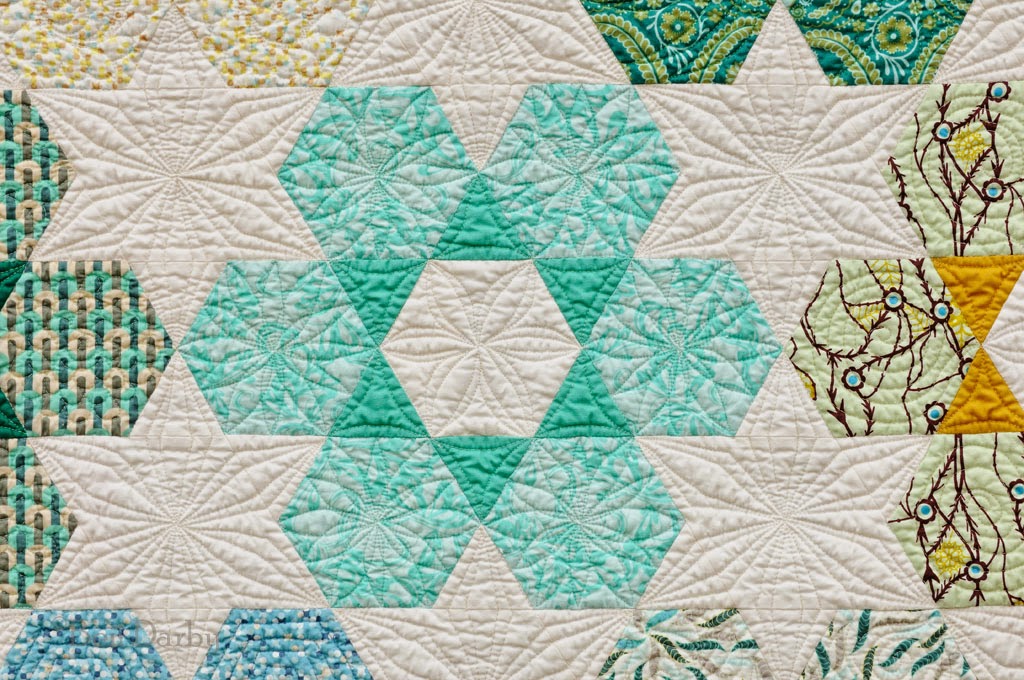 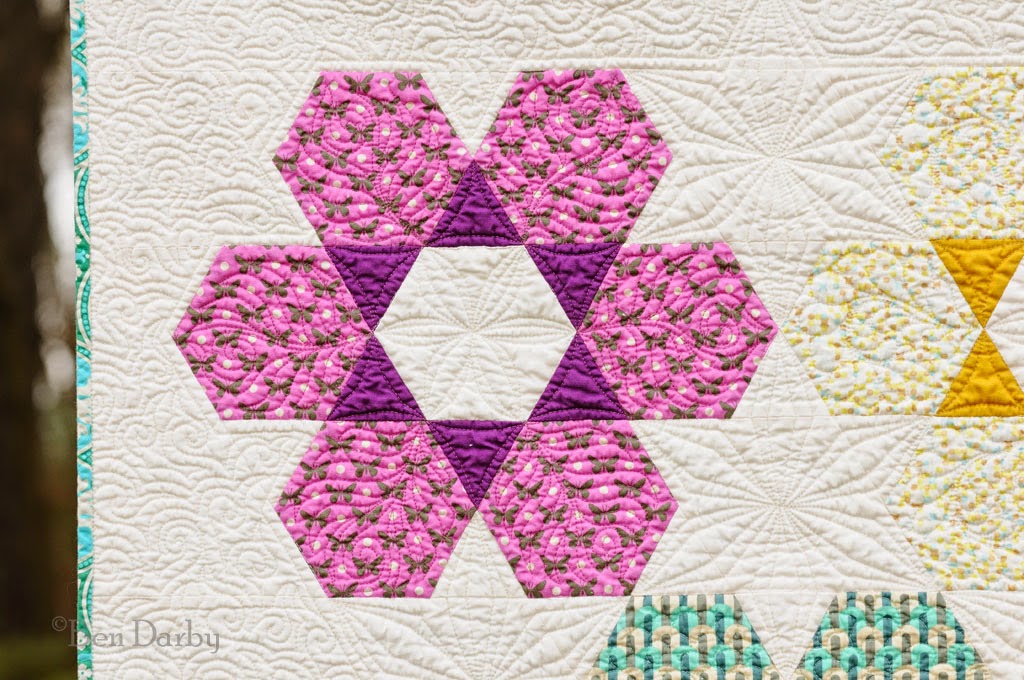 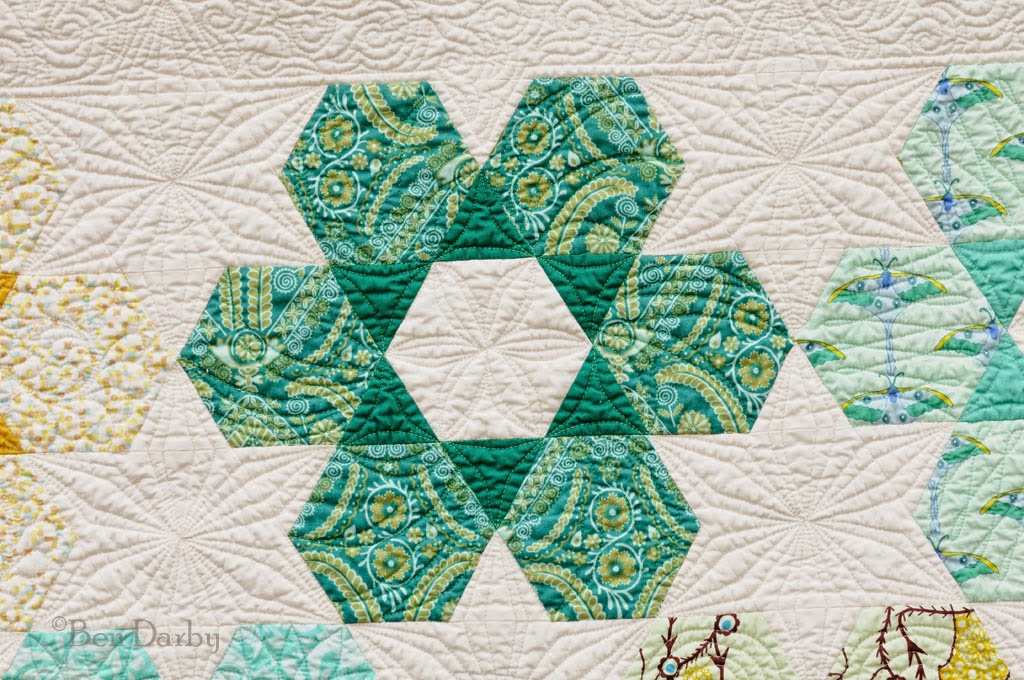 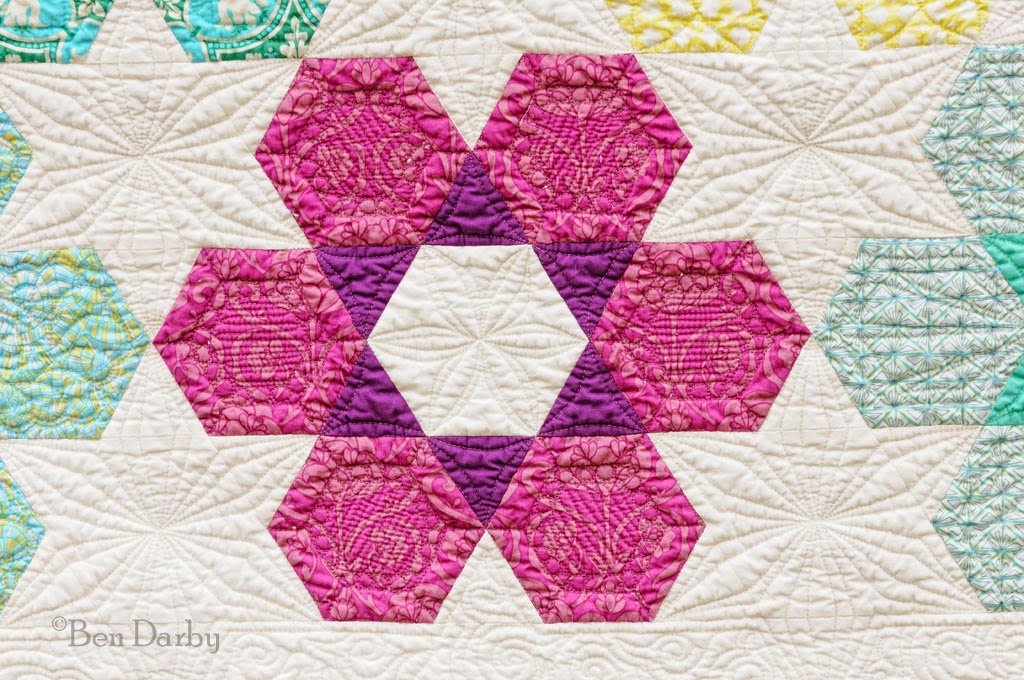 I'm linking up with crazy mom quilts for Finish It Up Friday.

Follow my blog with Bloglovin
Posted by Ben at 10:57 PM 8 comments:

I've been busy paper-piecing arcs for a pickle dish quilt.﻿ 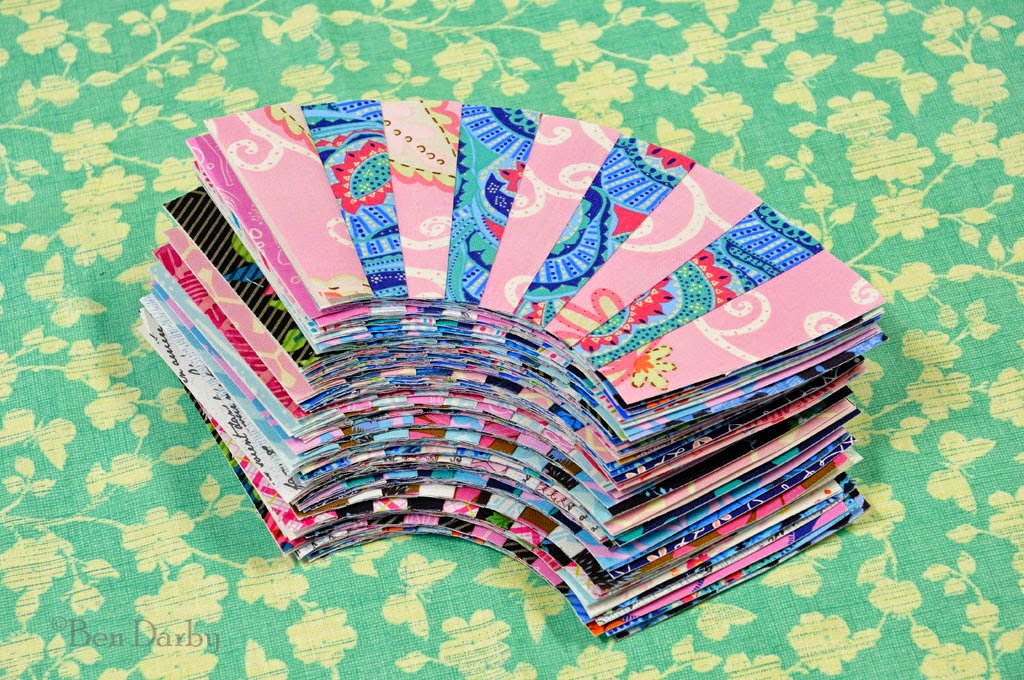 I need a total of 96 arcs; I've completed a little more than half that amount so far.

I've been piecing them together assembly-line style, working in sets of 8.  I've been surprised at how quickly they are coming together.  I can usually finish a set of 8 in an evening's sewing time.  I cut plenty of rectangles in advance (too many, to be honest), and it is easy to get in a rhythm of sewing, pressing, and trimming. 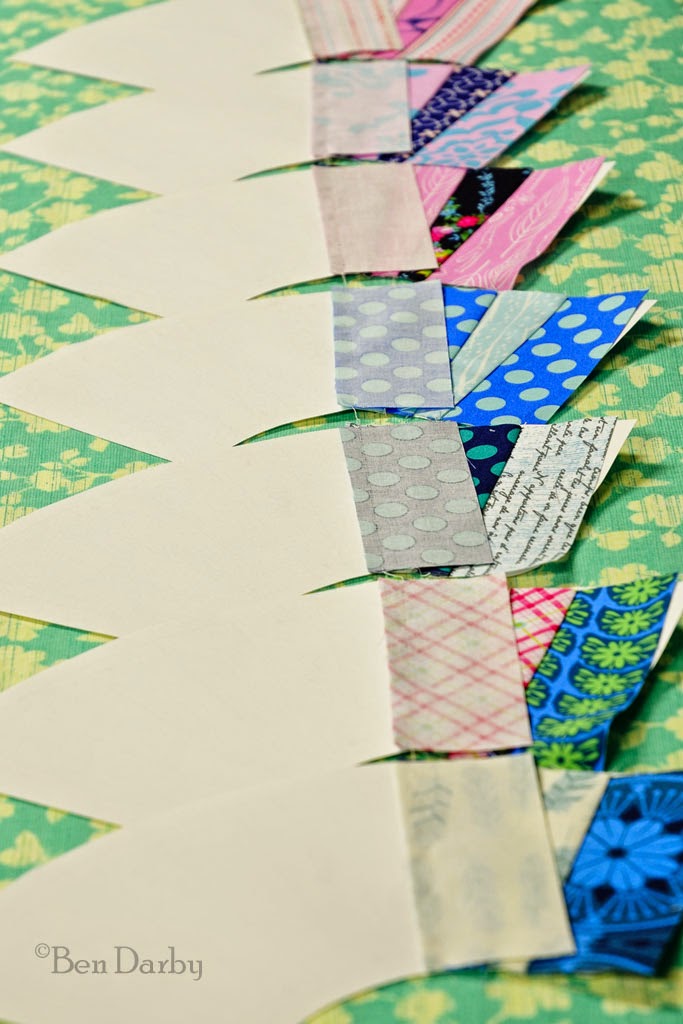 The pattern (from Kaffe Fassett's Quilt Romance) strongly suggests using a design wall to plan out the quilt layout, so a couple of months ago I made a few 4'x4' portable design wall sections.  (They are "portable" because I don't have enough wall space to hang them.)  But when I went to play around with my new arcs, I realized the foundation paper prevents them from sticking to the wall.  So I guess I'll be planning my layout on the floor, then pinning them to the wall to keep them organized.

I'm glad the arcs are coming together quickly.  I imagine the next steps -- piecing the curves and removing the papers -- will be more tedious. 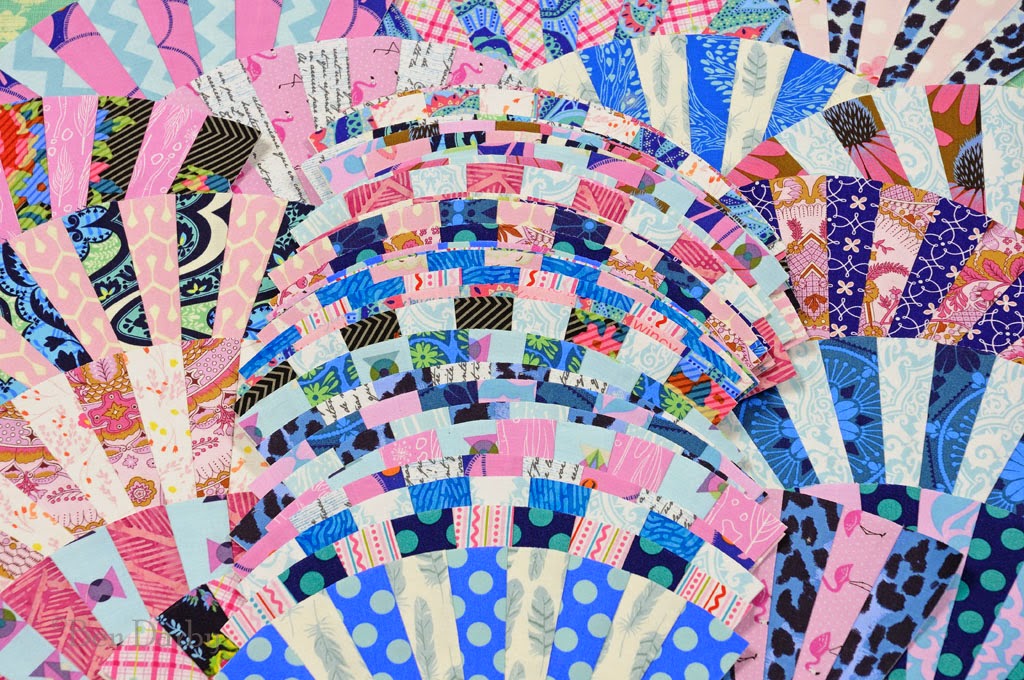 I'm linking up with Lee for WIP Wednesday.
Posted by Ben at 8:09 AM 6 comments:

My latest finish is this pair of bow ties: 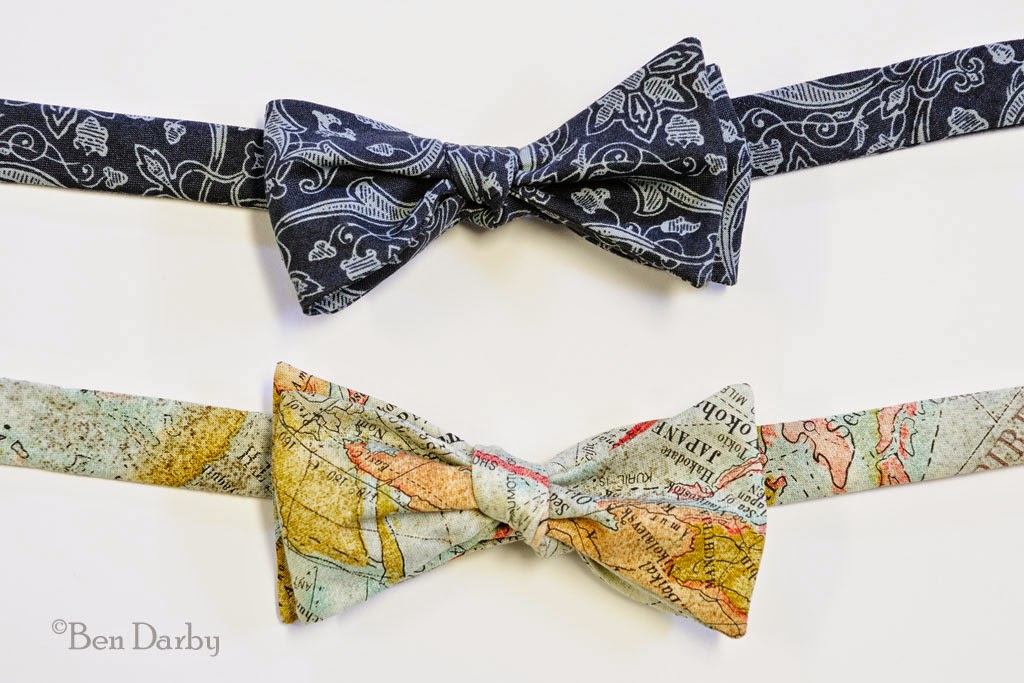 I used a pattern from BurdaStyle.  I've used the pattern before, for this tie from 2012: 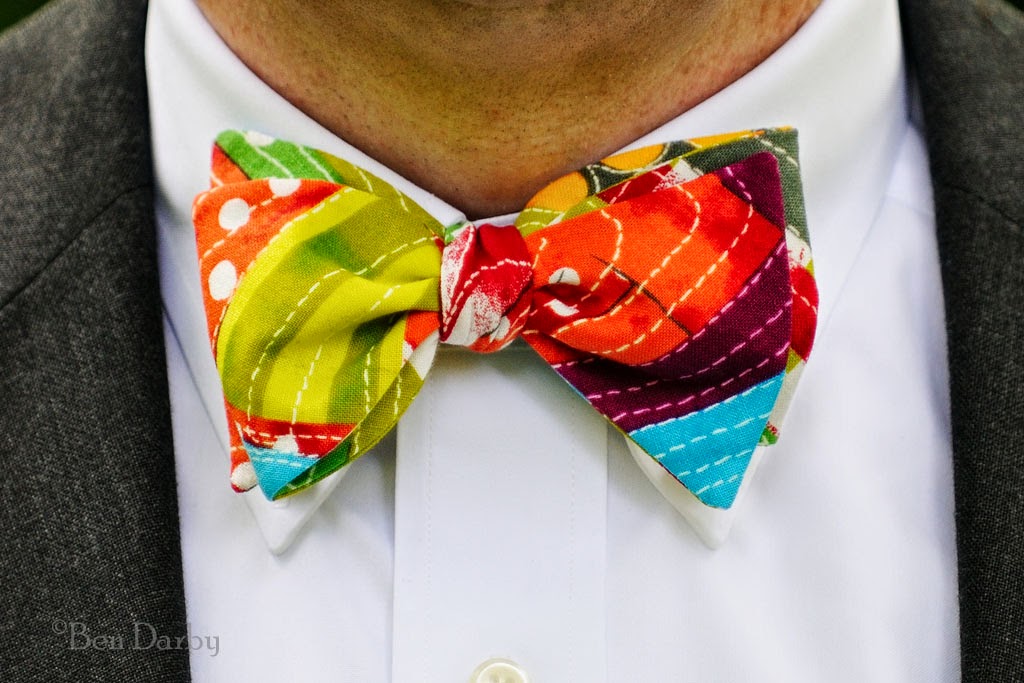 The pattern is a little short for a size 16 neck; the first one I made barely fits.  For the latest ties, I added a couple of inches to the straps.

The pattern includes a trick for turning the bow ties right-side-out.  It works well once you figure it out, but use strong thread, and double stitch the corners.  The thread used to pull the corners out broke on me once; I was worried that the stitches might break too.

The fabric in the black bow tie is from Parson Gray's inaugural line.  I used this fabric to make bias-cut binding for this quilt, and I set aside a few extra inches of the bias cut just for this purpose.  That means this tie has been in my head for over two years! 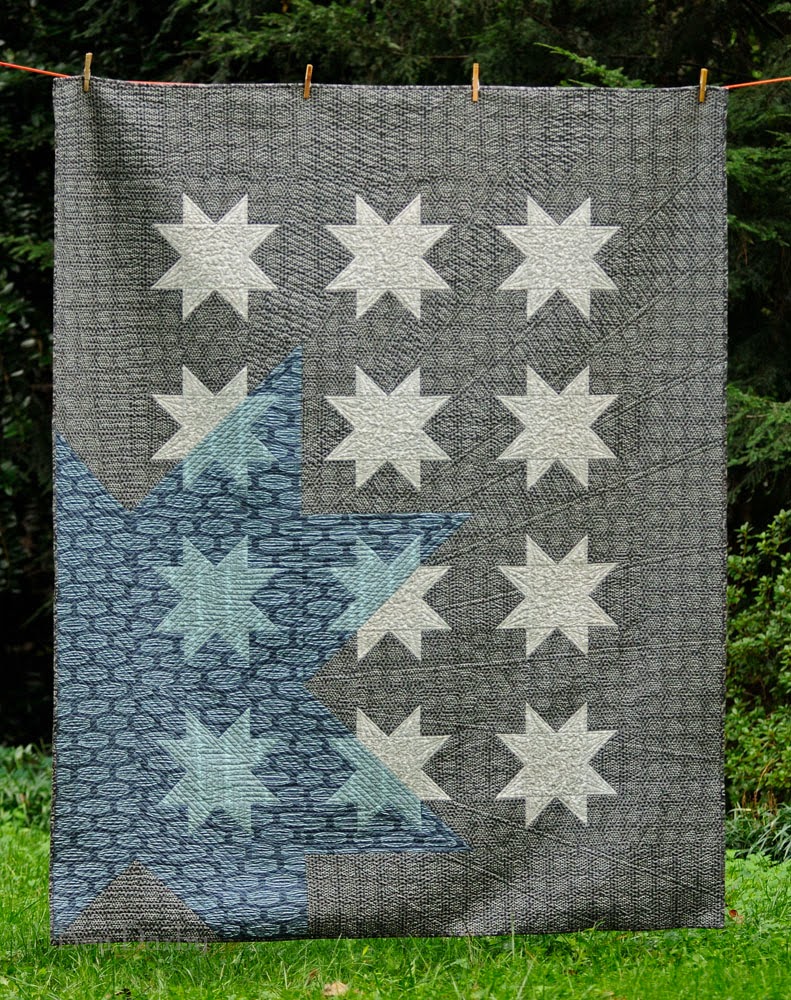 I managed to devote some time to making these ties when I ran out of thread for my current quilting project, and had to wait for an order of new thread to arrive.

The map fabric is from Tim Holtz's Eclectic Elements.  Both my teenagers were fascinated with this tie and fabric.  My daughter requested that I make her a travel wallet using it -- I'll have to figure out something for that next!
Posted by Ben at 10:52 PM No comments:

A quilt for my great-niece 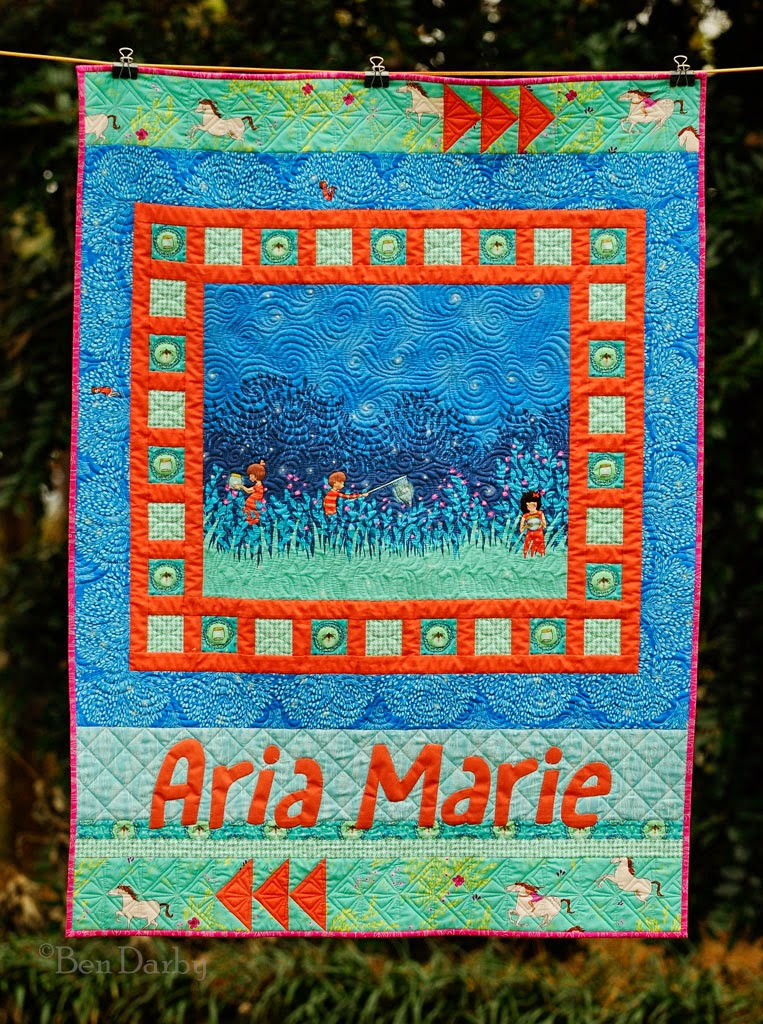 A few months ago, I made a pair of twin baby quilts using Sassafras Lane's Lullaby Lane quilt pattern.  As I was working on those quilts, I realized Michael Miller's Wee Wander collection would work well with this pattern.  So when my niece announced she was expecting a baby girl, I started this quilt for her. 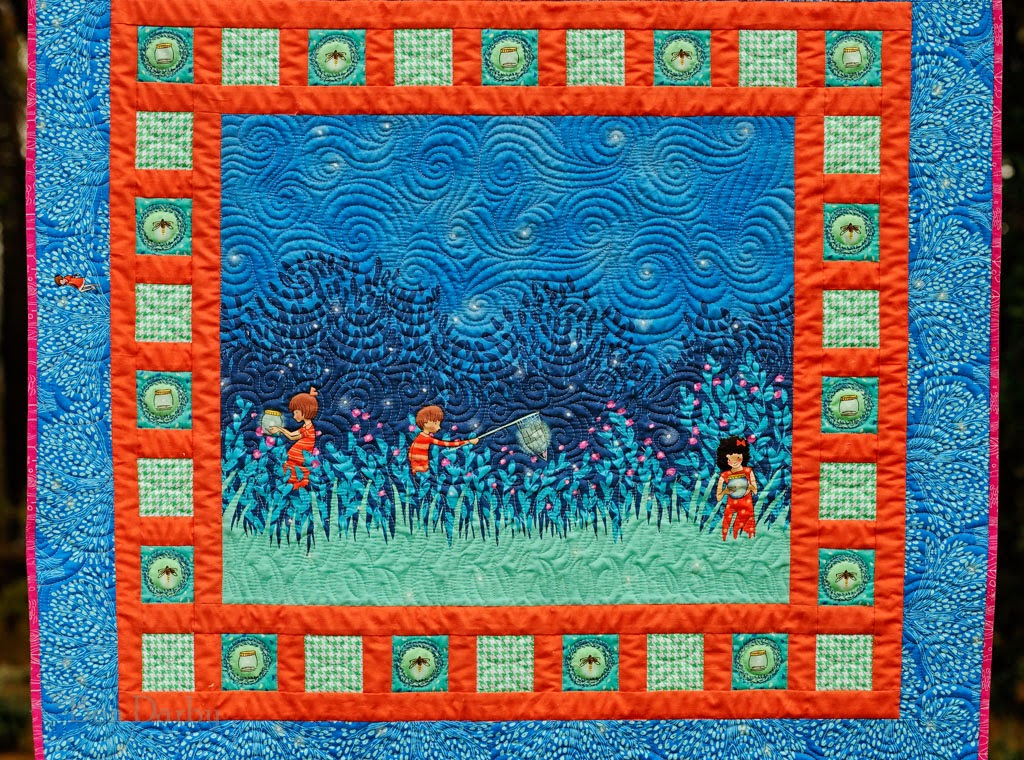 The panel fit the pattern perfectly, and the firefly fabric worked well for fussy-cutting squares for the border.  I tried a couple of new-to-me quilting designs, with swirls in the sky and a grassy pattern for the foreground.  I originally quilted the fill only within a quarter inch or so of the characters, but that left them a little puffy for my taste.  I decided to try outlining them with charcoal thread, not knowing whether it would work or not.  I was quite pleased with the result: 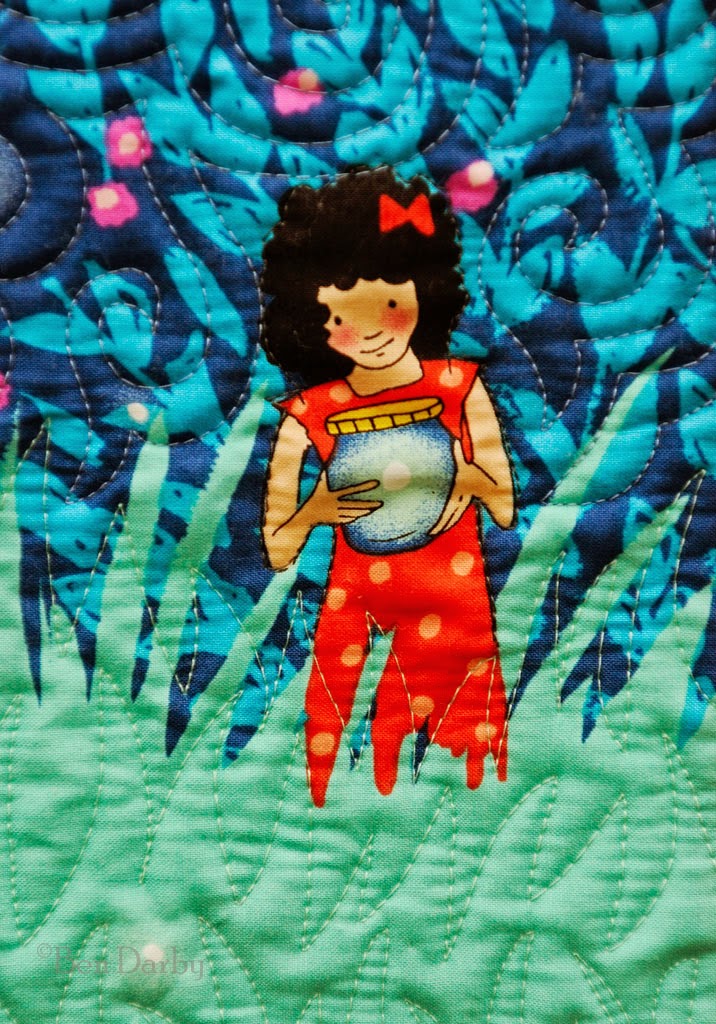 I used a trapunto technique under the "A" and "M" of the applique.  For the top and bottom borders, I pondered feathers or scrolls, but I couldn't work out how to do them around the flying geese.  I eventually came up with the idea to repeat the triangles across the borders with the quilting. 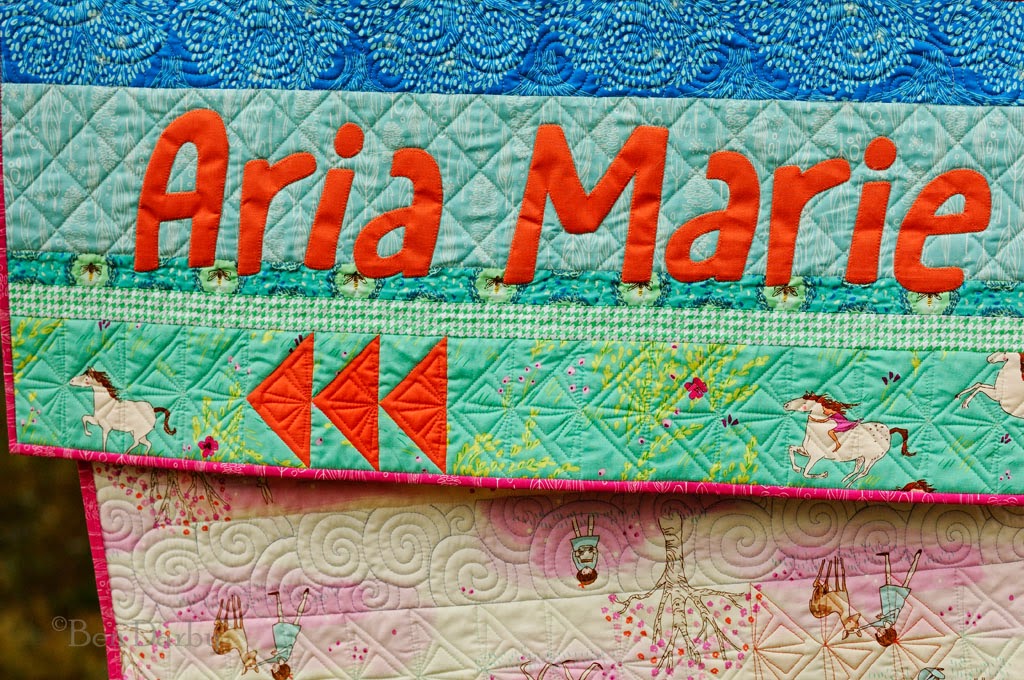 I added magenta binding and a pinkish backing to make it more "girly." As I learned with the twin quilts, it doesn't take much additional fabric to get a second quilt with this design, especially if you shop at places with half-yard minimum cuts. (As long as you don't do a lot of fussy cutting, or make cutting mistakes. Ahem.) So there just might be another Lullaby Lane quilt in my future. And Michael Miller's Cotton Couture in Limeade could make for a great sashing with these prints; it's a perfect lightning-bug green. Just sayin'. 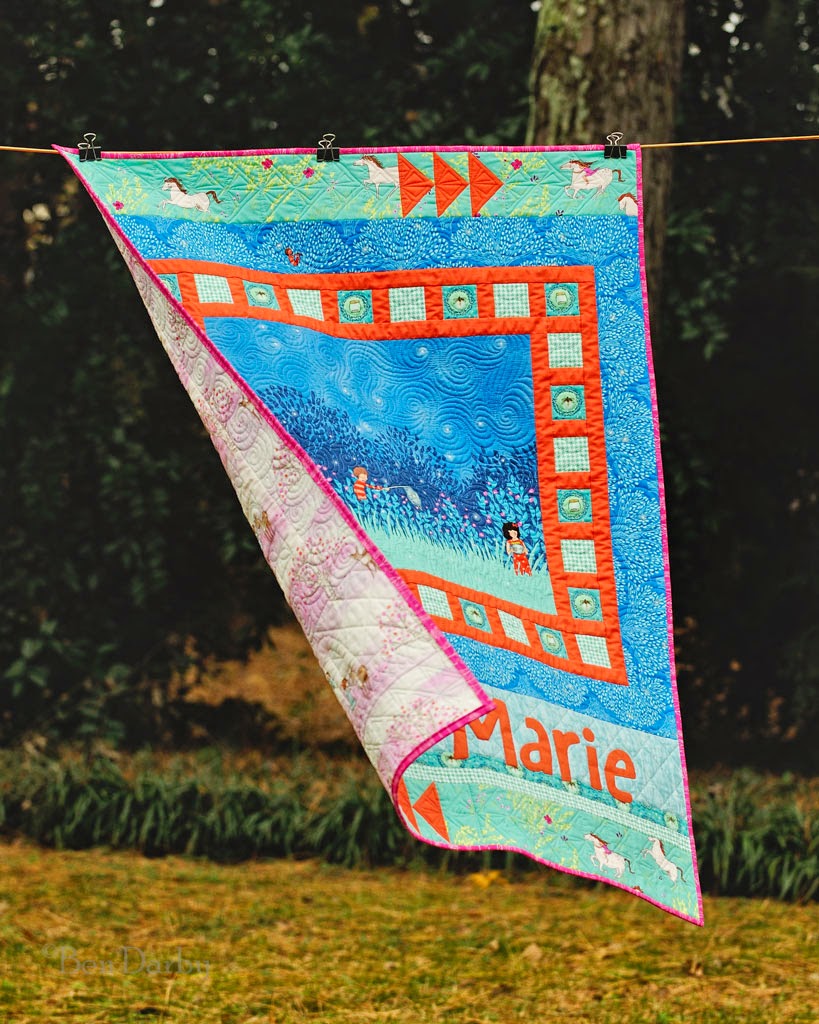 We were able to deliver the quilt in person just before Christmas.  What a treat it was to see and hold my new great-niece at only a few days old.

I'm linking up with crazy mom quilts for Finish It Up Friday.